The Fatherline and the Republic of Cousins

June 19, 2014 feature, HBV Comments Off on The Fatherline and the Republic of Cousins

(Edited to change the findings graphic to something more striking.)

Way back when the thesis that’s now a great chunk of paper on the floor to my right was just a bunch of ideas rotating around my head, I decided that I would take a tack to explain HBV which based in kinship rather than culture.

One of the most important terms I’ve had to learn and use to accomplish this is patriline.

One of the most recognisable examples of this would be the endless begat, begat, begats in the Bible in which women are barely mentioned, and which are used to give Jesus a pedigree that commands respect.

Linda Stone and Diane E King find that patrilineal structure effects understandings of the Middle Eastern family, finding that Kurdish men tended to consider their own family histories in patrilineal terms which excluded women just as much as any Biblical genealogy. Patrilineality suffuses a great deal of Muslim family law, and is even evident in naming conventions. Patrilineality is also fairly limited on the global scale, with many societies developing bilateral kinship systems (as in the West) or ones which are matrlineal. Leela Dube suggests that it is the differences between the patrilineal cultures of South Asia that lead to women being held to higher levels of scrutiny and surveillance by their male kin than those in matrilineal South East Asia, even where both were Muslims. Play nice, boys. Or I’ll bang your heads together.

The thing about organising relatedness in this way, though is the tendency for conflicts between brothers to cause problems. Where a dominant man dies, it might not be clear which of his sons will step into his shoes. Given that these societies tend to be pro-natal, there may be many brothers competing to be the new patriarch, but also depending on each other – to farm together, to share the resources of the family, to protect their family from outside attacks.

This need to balance the urges towards independence with the requirement towards interdependence leads, I think to the very distinctive and unique form of marriage found in the Middle East – that between the children of brothers, often called FBD marriage. What this form of marriage does, I argue, is strengthen relations between brothers, through interweaving their interests in their children and grandchildren with those of their brothers.

The Republic of Cousins 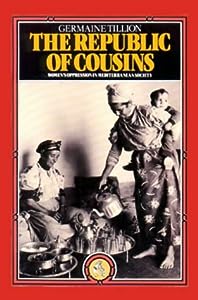 The Republic of Cousins

In the book variously titled The Republic of Cousins/My Cousin My Husband/The Harem and the Cousins, French ethnologist Germaine Tillion suggested that the regulation of cousin marriage was an aspect of ‘honour’-based violence, not just in Maghrebi regions, but across the southern Mediterranean also, citing examples of vicious ‘honour’ killings in Italy and other European countries.

I was able to use my survey data to test that theory in a way that Tillion couldn’t, through cross-tabulating cousin marriage against experiences of HBV. In my sample, around 20% of respondents had either married a cousin themselves, or one of the siblings had done so1. Around 30% reported that there had been experiences of HBV within the family. But cousin marriage didn’t directly correlate with HBV. However, it did once I added another ingredient. Consent.

Consent had proved to be very interesting with regard to birth order, so I thought it might be an element here. Through separating high and low consent forms of marriage (free choice/collaborative arrangement vs non-consensual arrangement/force) I found that many more cousin marriages were in the latter category.

Cousin marriage, then, is far less likely to be actively chosen by the partners than other kinds of marriage. When this was factored in to the likelihood of experiencing HBV, a significant relationship was found.

55% of low-consent cousin marriages occurred in families where there had also been reports of HBV. In comparison, where cousin marriage was absent, even where consent was low, only 25% of respondents reported experiences of HBV.

Obviously this is an important part of the story, but not the whole story. Looking at the patterns of HBV in India, which are not about enforcing cousin marriage but preventing cross-caste relationships.

What’s common in these instances is:

So to tackle HBV over the long term we need to build an inclusive society where the family can take upon diverse forms, without privileging male-centred forms over others, tackle inequalities and build bridges between communities, and work to ensure women’s bodily sovereignty. Piece of cake.