The cradle of patriarchy

This is the second of four posts taken from the ancient history section of my thesis. This section is about the development of the acceptability of violence to enforce sexual mores.

Part two: The cradle of patriarchy

Foraging and hunter gatherer societies tend towards loose control over sexuality, with a plurality of available forms of sexual partnership. This may have been characteristic of life in the Palaeolithic era1. However, through the development of the first city-states and empires in the Mesolithic era, a repressive attitude to female sexuality can be seen to develop along with the transformation to martial, phallocentric collectives. Sumer is very likely to have been the first multicultural society, featuring varied modes of subsistence, including fishing, agriculture and pastoralism, leading to a breakdown of mechanical solidarity (in Durkheim’s (1893/1997) terminology), and a need to create an overarching normative system. 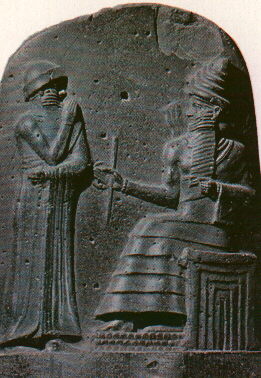 This was indicated by the promulgation of the first recorded legal systems in human history. Sumerian law punished women who pronounced divorce upon their husbands with drowning , and married women who seduced other lovers with execution; if she was not suspected of seduction, then the penalty was a fine2. Nevertheless, Tetlow also indicates that women held a far higher status in Sumer than they did in later Near Eastern civilisations, and under the influence of nomadic peoples, even Sumerian practice became more punitive towards women’s sexual ‘deviance’3. In general, the development of Mesopotamian laws indicates increasingly brutal treatments of women considered to have violated an increasingly restrictive code of sexuality, alongside a gradual dissipation of the rights of wives.

These are well-covered in Lerner4, but to summarise:

The…introduction of daily violence between men and women are everywhere demonstrated…in small by beatings, tearing out off of ears, and other brutalities specifically referred to in the kingly edicts which have been preserved. The Middle Assyrian Laws of about 1300 BCE are particularly harsh. Mention was made earlier of self-abortion; the punishment decreed for the woman who has taken the liberty of regarding her body as her own possession is to be impaled on a stake and left unburied. In marriage, apart from punishments prescribed for adultery, when wives go out with their heads uncovered the husband is given carte blanche to flog his wife, pull out her hair, split and injure her ears. ‘There is no legal guilt in it.’ Commentators point out that these laws are crueller than those promulgated by Hammurabi four hundred years earlier, with many of the penalties involving mutilation…if a husband does not choose to kill his adulterous wife and her lover, he may cut off her nose and then castrate her lover and slash his face. If a man’s daughter was raped, the father might violate the despoiler’s wife; if the rapist was unmarried, he might merely force him to marry the daughter.5

Regarding adultery, each iteration of Mesopotamian law prescribed death for the woman concerned6 — either at the hands of her husband or an unspecified ‘they’; whether this may refer to her agnates or legal guardians, within the classic agnatic pattern of ‘honour’ killings, is unclear , but it is not unthinkable. Certainly, Mesopotamian law seems to be based upon the expectation of patrimonial corporate family structures7.

Custodianship of daughters was passed to their fathers: if a girl claimed to have been raped, then her father was due recompense for her lost value on the marriage market; if the alleged rapist claimed the sex was consensual, then there was no charge against him. Middle Assyrian Law states ominously that ‘the father shall treat his daughter as he pleases.’

Ancient Mesopotamia can therefore be considered the earliest identifiable source of a persistent and widely dispersed macrocultural meme: the metanormative violence involved in HBV, as a form of enforcement of the norms generated within the kinship mode of production within corporate families. This also filtered into Christian antiquity8 where Basil of Caesarea (c. 330-379) shows an awareness of the potential for HBV within Christian congregations: adulterous women should not be publicly withheld communion, he states, ‘lest we cause their death’9.