This post is a bit late, but I was too angry to write about it earlier.

‘Shameless’ Mick Philpott presented himself as a ‘character’, a swaggering ne’er-do-well bragging about his unusual domestic arrangements (wife Mairead plus co-habiting mistress Lisa Willis) and his seventeen children on the human bear-pit of the Jeremy Kyle show. Yet the quantity of Philpott’s parenting vastly outstripped the quality: six of these children perished in a house-fire Philpott started himself. Lisa had left him, taking her children with her, and Philpott formulated a juvenile revenge fantasy – to frame her for arson and heroically ‘save’ the children from the flames, in collusion with Mairead and a neighbour. The ill-conceived plan failed, all the children died, and Philpott and his associates were found guilty of manslaughter.

Mrs Justice Thirlwell’s comments were completely on point – well worth reading in full. She identified that Philpott’s crime was part of a far wider pattern of abusive and controlling behaviour.

You controlled and manipulated those women [ie Lisa Willis and Mairead] as you had controlled and manipulated their predecessors. They ran the household and looked after all the children. They went out to work. Their wages and their benefits went into your account, you controlled how money was spent. Your suggestion that this was a joint account and this was a normal family arrangement was frankly ridiculous. These two young women were not even permitted to have a front-door key. You checked on Lisa Willis’s relationships at work. Exactly as you had done in your earlier relationships. I accept that the level of physical violence had reduced in recent years, but the level of control, aggression and fear most certainly did not. Women were your chattels, there to look after you and your children (for that is how you describe them all). You bark orders and they obey. Witness after witness described the dynamics in your household. You were kingpin, no one else mattered.

Philpott had served 7 years for attempted murder after stabbing a former girlfriend 27 times, and viciously attacking her mother as well. Thirlwell commented that:

…it is clear from the evidence that I excluded from the trial that you have used that conviction as a means of controlling women, terrifying them in what you might do.

Philpott’s strategies for maintaining control over women had clearly adapted over the years since he left prison. Forced pregnancy is increasingly recognised form of abuse: keeping women constantly pregnant is a means of control, and, it seems for Philpott, also served as a public display of virility. Philpott was not, precisely, a family annihilator: the death of the children was not intentional, it was due to the rank stupidity of his plan. But Philpott shares the most significant trait – an obsession with masculinity, as well as causing devastation on an enormous scale. So why was the media’s focus on this crime not upon masculinity and male violence but class? Because Philpott belonged to that most despised category of persons, benefits claimants.

George Osborne, Chancellor of the Exchequer, pronounced that Phillpot’s ‘benefits lifestyle should be questioned.’ The Mail described Phillpot as a ‘vile product’ of the welfare state. Phillpot was thus recruited to the campaign to demonise the poor (in which role he had already been employed by Anne Widdecombe): already deemed to be scroungers and skivers, council tenants and the long-term unemployed were now portrayed as child abusers, in a retread of Cameron claiming Karen Matthews as an example of ‘Broken Britain‘ where it seems that anything negative that happens on a housing estate is taken as a representation of an entire class.

This is incoherence runs through the entire argument: Carole Malone simultaneously states that ‘most people in the welfare system hate the likes of [the] Philpotts’, and yet positions the situation as ‘an accident waiting to happen’ caused by ‘benefits dependency’ – thus making an odious man into an emblem for a sector of society which deplore him.

And yet millionaires commit arson and millionaires kill their children. Should we scrutinise their lifestyles, enact taxation to prevent people becoming millionaires? If not, then why is class only relevant to violence when the victims and the perpetrators are identified as ‘underclass’?

The argument for benefits dependency is hugely overstated, and it just doesn’t add up. Malone claims that Philpott wanted custody of Lisa Willis’s children for the sake of their child benefits, but as the Economist points out, ‘breeding for benefits’ is a poor strategy – children must be fed and clothed, and this is barely, if at all, covered by welfare payments, as anyone who’s ever tried to live on them can testify. Also, it is one for which there is precious little evidence – only 8% of benefit claimants have three or more children, and there is no correlation between family size and socio-economic status.

However, child poverty in the UK is incredibly common, where two-thirds of these children are growing up in working households (as indeed, were the Philpott children, because their mothers were in work.) Work, in fact, is by no means a certain route out of poverty, given the growing wage inequalities across British society. Osborne’s statements are typical of the trend to ignore this evidence, to place poverty as the outcome of personal choices rather than social problems and to use this to demonise the poor, when the real problem is that too many people are just not able earn enough to provide for their children in the present economy. Having children may be a choice, but it is not one which should only be available to the wealthy. This demonisation of reproduction within the ‘lower’ classes has uncomfortable echoes of Keith Joseph’s eugenically flavoured concerns around ‘human stock.’

Benefits for the unemployed are a very small part of public spending, and the supposed unsustainability of welfare is much exaggerated. Attacks upon benefits – and benefits recipients – are ideological, not practical, and it is in this sense that Mick Philpott has been recruited to justify right-wing policies which will impoverish children and families. Mick Philpott engineered a tragedy in order to demonise Lisa Willis, killing his children through his reckless and callous lack of concern for their safety. Osborne exploits that tragedy in order to demonise an entire sector of society, while – recklessly, and yes, callously – his budget will place more children in poverty than there have been over the past 20 years, as the UK continues to bump along the bottom of all indicators for children’s well-being in the developed world. Using the deaths of six children to justify the further impoverishment of children in struggling families is shameless. 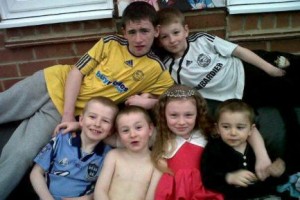