The most dangerous job in the world

March 1, 2014 feature, human rights Comments Off on The most dangerous job in the world

Being a lawyer, journalist or trade unionist can be a job with more risk of physical injury than working in a mine or construction site – if those legal, literary or organisational skills are directed at securing human rights. It is those who work to secure the human rights of women, sexual and ethnic minorities and the poor who are the least secure themselves – vulnerable to state and corporate harassment from hired thugs, the forces of law and order, and armed groups, vulnerable to smear campaigns presenting them as terrorists, security threats or immoral persons, invasions of their privacy, harassment of friends and relatives, intimidation, imprisonment, the seizure of their assets and so on.

A tribute to feminists and women’s human rights defenders

In 2013, the organisation Frontline Defenders noted the killing of 26 Human Rights Defenders from countries as various as Cameroon, Colombia, Democratic Republic of Congo (DRC), Guatemala, Honduras, India, Kenya, Pakistan, the Philippines, Somalia, and Venezuela; of course, many people have disappeared of the face of the earth, and their ultimate fate will never be known. The range of abuses these brave individuals confront are diverse: from protecting the environment from profiteering corporations, to attempting to unionise sweated labour. One of the more precarious areas of activism, however, is campaigning for women’s sexual and reproductive rights, and against violence against women, because these confront deep-seated patriarchal ideologies around ‘family values’ and ‘morality’. According to the Women Human Rights Defenders International Coalition, women activists ‘face the same types of risks faced by all human rights defenders but because of their gender they are also the target of, gender-based violence and gender-specific risks.’

In Iran, for example, women’s human rights defenders have faced imprisonment, which may include torture, for crimes as trivial as attending peaceful demonstrations. Nasrin Sotoudeh, an Iranian lawyer, who was the winner of the European Parliament’s 2012 Sakharov Prize for Freedom of Thought, for her defence of children facing the death penalty, dissidents and protesters was given a sentence for six years by the Islamic state. The charges against her included not wearing a headscarf in a video, ‘acting against national security’ and propaganda against the regime. Although she was released early, there remain an unknown number of political prisoners in Iran’s notorious Evin Prison, in which the torture and sexual abuse of prisoners has been suspected.

Violence against human rights defenders does not necessarily come from the state, but can also come from the family: Laxmi Bohara, a Nepalese activist was allegedly murdered by her husband and his mother in 2008 – her husband and his family saw her activism as tantamount to adultery, and unsuitable for a ‘good’ Hindu woman. Those of her friends and colleagues who campaigned for justice in her case were themselves targeted for threats and violence. There is a dizzying amount of evidence for the persecution of female human rights defenders: Wabiwa Kabisuba ran a centre for victims of sexual violence in the Democratic Republic of Congo: she was dragged from her home by eight uniformed men and shot, and she is only one of many women threatened and attacked in the DRC. Lorena Cabnal was one of many women opposing the exploitation of mineral resources upon land claimed by the indigenous Xinka people of Guatemala, and supporting women’s rights. She has received death threats for her work from 2004. 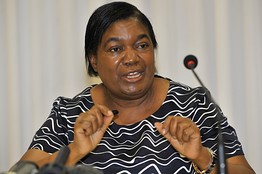 Jilani’s successor Margaret Sekaggya observes that attacks upon human rights defenders have only increased since 2008, and will be reporting to the UN Council on the 11th of this month.

We owe it to those heroes on the frontlines to consider Sekaggya’s report most seriously, because a free and fearless civil society is essential to democracy, peace and justice: the actions of human rights defenders like Nasrin Sotoudeh, Laxmi Bohara, Wabiwa Kabisuba and Lorena Cabnal serve on the frontline of the fight for human rights for us all. The most dangerous job in the world is the most vital for humanity. It is in all our interests to take every possible step to reduce the hazards of standing up for the victims of human rights abuses.